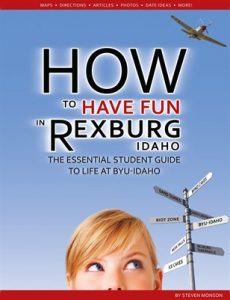 Several Years ago I wrote a book called “How To Have Fund in Rexburg“.  I spent months researching, taking photos, and designing the book.  At last I finished the book which was a very satisfying project.  I sold a number of copies to friends and acquaintances, and talk with the BYU-I bookstore about further distribution.  Unfortunately, this never quite got off the ground.  After a while, I let it go.  I was please with the final product and I learned a lot from it (even if I didn’t really make much money from the project).

The Fun In Rexburg Blog…

I shared these articles on Facebook and enjoyed moderate success.  Several of my recent articles enjoyed sharp spikes of traffic.  Thousands of people have viewed the website, and I’ve received generally positive feedback from the public.  Still I haven’t been quite satisfied.  I designed the layout myself, but time constraints and demands of life forced me to make it live before truly polishing the layout or design details.  After all, I could always go back and improve it (which is something I still plan to do).

Sometimes it’s better to get something out there, than to hold it back until they’re perfect,  so I settled for “good enough” with plans to eventually go back and improve the finer details.  One problem I know I’ve faced is the SEO was never properly considered.  As such, it’s never ranked very high in the search engines.  Today, I actually went back and fixed some of the SEO related problems with hopes that it may begin to rank better on Google.  I guess we’ll see how it goes.

What are your thoughts?  Was I wrong to publish the site before I was completely satisfied?  Does the site accomplish it’s goal?  I’d love your feedback.