The following is the first chapters from a story I wrote when I was 11 years old.  I wouldn’t go so far as to say it is well written, but it is definitely entertaining! 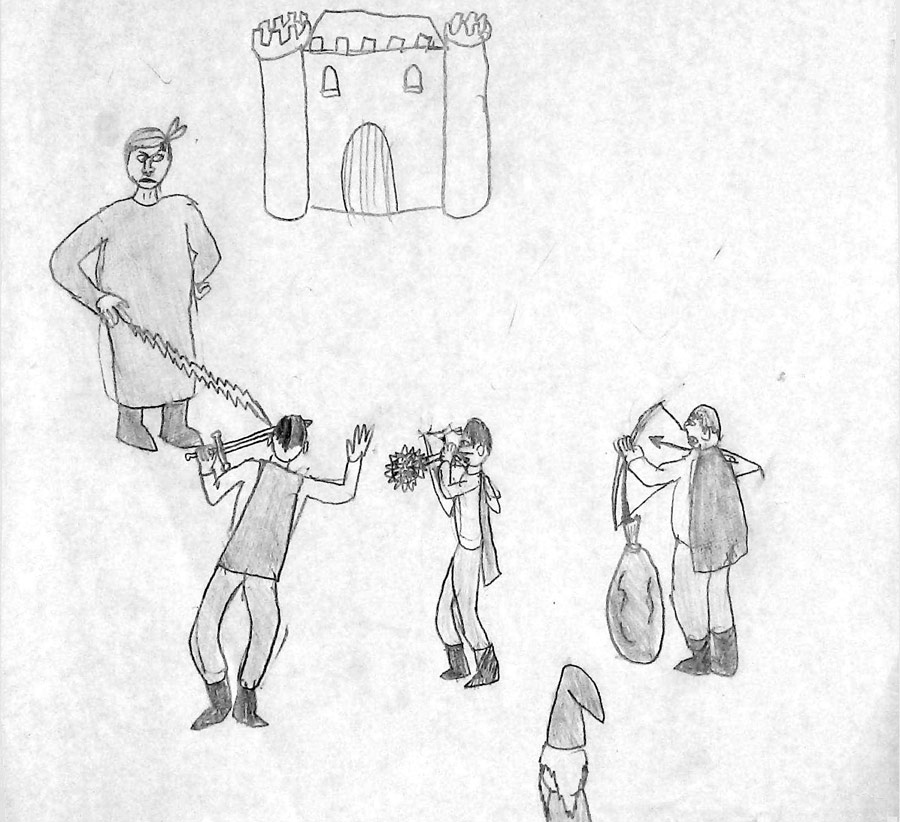 You can read to full story (with pictures) as a PDF. 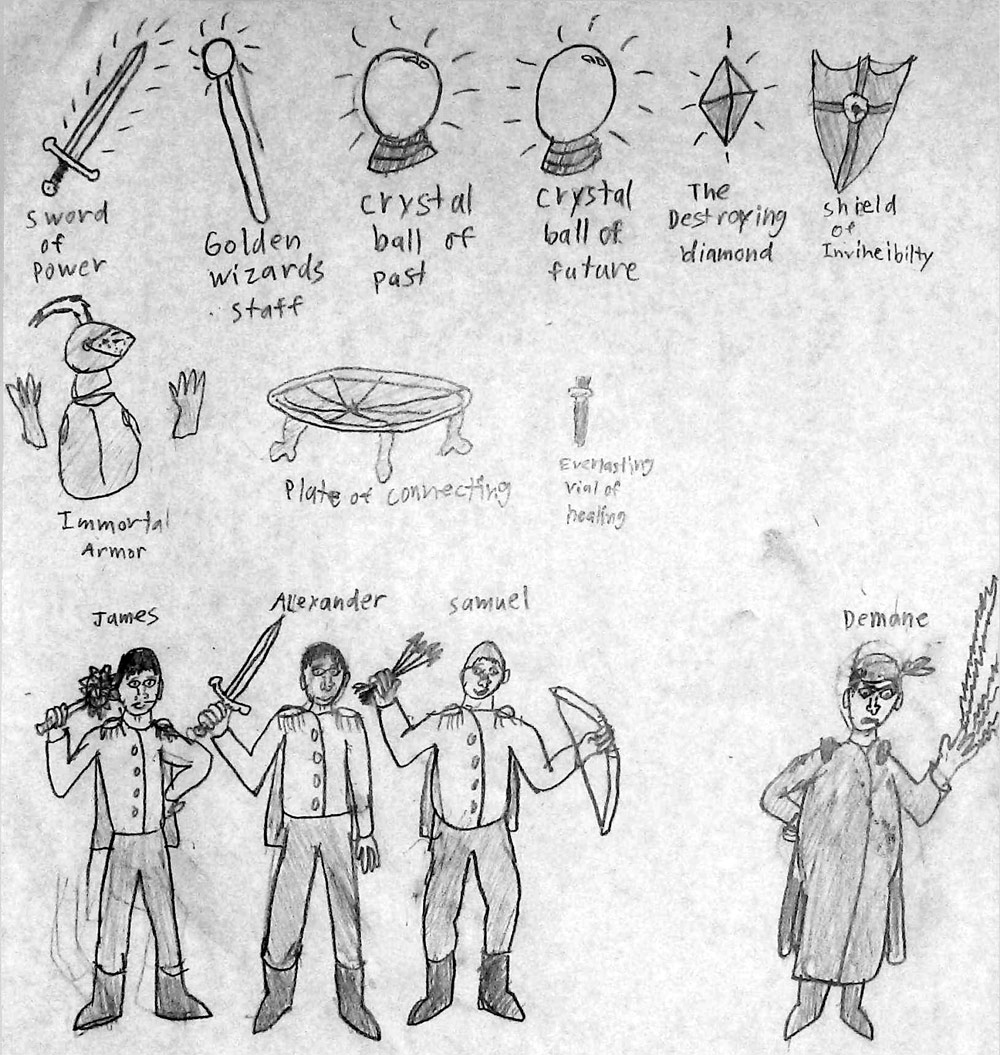 A long time ago, in a castle far away, there lived a young prince named Alexander.  He  was 18 years old. His cousins, Samuel and James were coming to visit from a Castle quite far away.  Alexander had been a prince all of his life, and so had James and Samuel. They were  carefree most of the time, no real adventures. But the Wizard of the realm was quite entertaining, with his stories, magic, and all. He was really quite magnificent.

Meanwhile, very far away, there was a magician who wasn’t exactly the nicest person in  the world. He knew some spells. and had some powers. but he wasn’t all that dangerous. Of course, no one In the kingdom knew about him, and how he had been struggling for power all of these years.

He also had an enemy, a Garger, which is a monster-like creature with dark green skin, red eyes, and sharp fangs. These creatures would usually wear an animal fur. Well. he really isn’t an enemy to the magician, lets Just say he causes some trouble now and then. The Garger is somewhat civilized. Not exactly like an English king, but he can talk In English, and will sell or trade practically anything he can.

This magician has a name, which just happens to be Demane. This fellow has a big thick magic book, but he can only use the first few pages. The rest of them are totally blank. The first pages says “to make the rest of these pages useful, and visible, you need the magic ruby stone.” Underneath is a picture of a small stone, with a hole in the front, containing a ruby. “You must hold the ruby against this book, and the spells that the stone may grant will be revealed to you.” Since Demane has been searching for this gem for so long, you will find that he doesn’t look as often now, as he used to.

One day, while he was looking for anything that might be useful, he sees it, in a Garger’s wagon, amongst a pile of other things, like weapons, cups, and a small diamond ring.

Quickly Demane walked up to the Garger’s wagon and asked what the price of the gem would be. The Garger put his finger to his chin, and paused for a moment, and said, “For you, 20 gold coins.” Then he quickly changed his mind, “Actually 30 gold coins.” Demane pulled a bag of gold coins out. “Here you go. I really need this gem.” He said as he handed him the money. “Ah, so you really need It?” The Garger said to himself. “I made a mistake, that gem is worth a lot. I’ll need 200 coins more.” “You must be Joking!” Demane replied. “If I wasn’t In such a hurry, I’d put up quite a fight!” Demane took all of the gold that he had on him, and gave it to the Garger. “Is this enough?” He asked. “Almost. You are off by seven coins.” Demane took a small pebble and threw It to the ground, making a puff of smoke appear. When the smoke disappeared, he had changed into a crow, took flight, and flew to his tent. “I’ll be right back…”

Not long after, Demane returned with a small bag containing the 7 coins that the Garger wanted. When he returned to the Garger’s wagon, there was another puff of smoke, and he had changed back Into his regular self, and handed the remaining coins to the Garger. They shook Hands and the Garger handed over the gem.

Demane hurried back to his tent, planning all the things he could do, now that he had the gem. When he arrived, he opened the book to the blank pages, and held the gem against it. It began to reveal many words. There was a big smile on his face as he read the first page.

“Obviously, you must have the Dragon’s Eye, because now you are reading these pages.”

Demane paused for a moment. He thought that Dragons Eye must be the name of the gem.

“These spells contain very powerful magic. But be warned that the Dragon’s Eye can only be used for ten spells per owner. The following spell is the spell to turn the Dragon’s Eye on. It will  not count as one of the ten.”

“Hulahula Gouleygoo. The next spell wlll turn on you! I wake you up, Dragon’s Eye–let all your power combine with I. By the power of the sun and the power of the moon, Gollymono dodo Foon!”

The ruby that was embedded In the stone began to glow, and Demane looked through the  spells.

After a few minutes, he found a particularly good spell to be his first one.  It was a spell to give him many riches, and to make him live like a king.

He said loudly, “Fodle natzl conosh boo!” And suddenly his tent became a huge castle, with gold, sliver, and  diamonds surrounding him. He even had a crown on top of his head. “With this book and gem, all of my wildest dreams can come true!” He chuckled to himself.

Back at Demane’s castle, he had just worked up a spell that he found particularly  interesting. A spell that could bring an army of turbo skeletons under his control. “With this spell I can have revenge on the King that chose another magician over me. And when I tried to kill  him the king threw me out.

Suddenly the entire room was filled with turbo skeletons, and it was a very large room at that! They all had  swords and shields, except two. One extra large one who carried a battle ax, and the General, who simply carried a knife.

The General keeled before Demane. “What is it you wish of us, Master?” He hissed.

Demane pulled out an old crystal ball off of a shelf, and blew the dust off. An image of the castle appeared. “This Is where I want you to go. I want you to take over, and kill everyone.”

“Yes, Master.” The General said In his hissing voice.

Quickly they started jumping into the mote. and swimming. All but one made it to the other side, because it got tired  in the middle, and sank to the bottom.

They tried to break the drawbridge, but it was too  strong. They did not stop, however. They began climbing up the walls. A few fell down into the mote but the rest climbed to the top of the wall, and began climbing down the other side.

Suddenly, one of the King’s guards saw them climbing over the wall. He took an arrow,  and shot it at one of the turbo skeletons. He hit the skeleton’s arm, and it fell to the ground, breaking into many pieces.

The guard sounded the alarm, and in less than a minute all of the guards and knights were there ready to battle. The turbo skeletons pulled out their weapons and began to attack. The  King of the Kingdom was at the front of his army.

Clanging swords clashed. The King swung his  sword with both hands at one of the skeletons, only to hit its shield. The skeleton fell back,  giving The King enough time to finish him off.  Two others jumped in front or the King, and began to attack him, and the skeleton he had  knocked down got to his feet. Swords continued to clash, but no victory.   After 20 minutes had passed, 20 of the King’s men had fallen, and only 7 turbo skeletons had fallen. After hours on continuing the battle, The King’s men were really beginning to tire, but the skeletons were not. 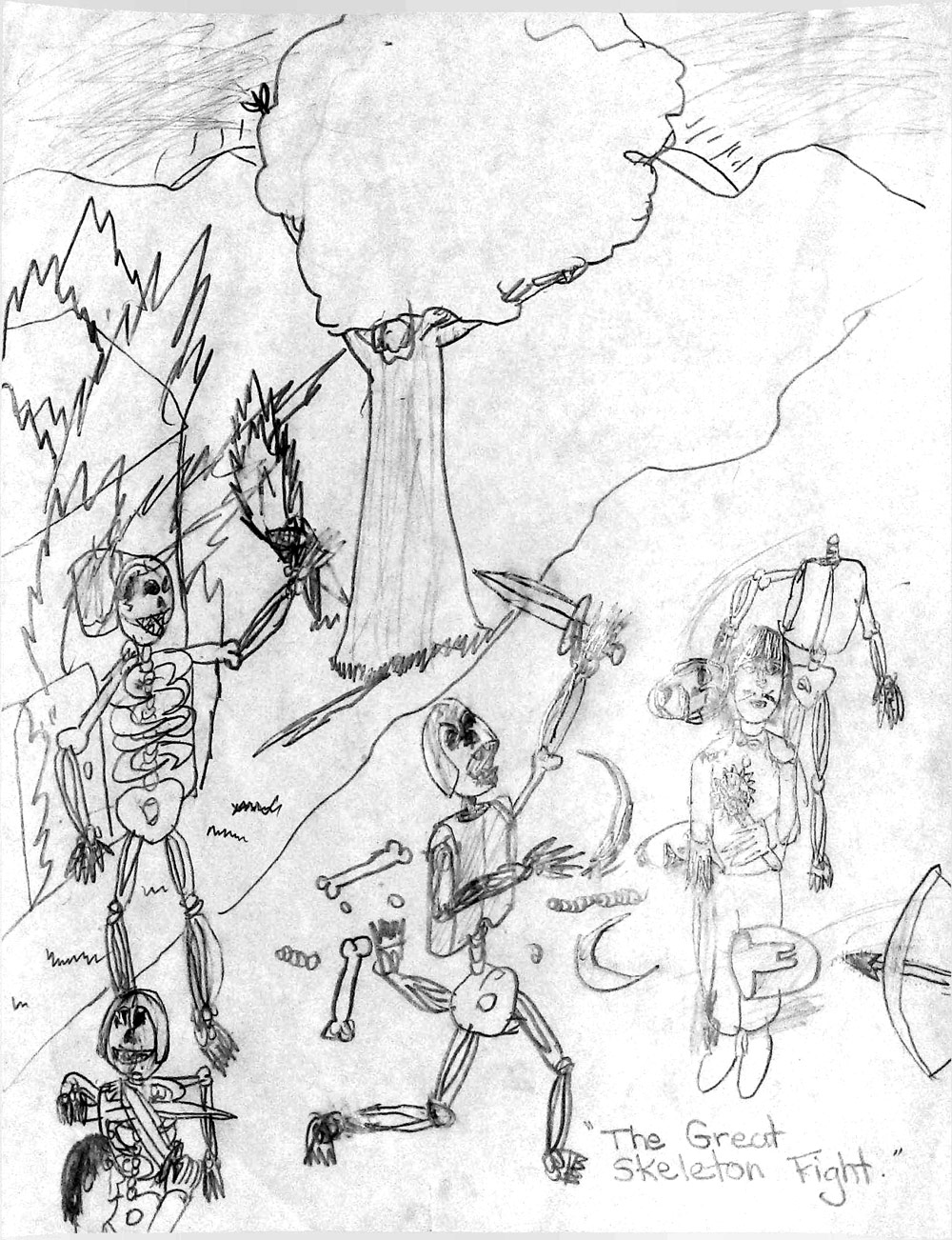